At Temple Shalom, we are committed to the essential Jewish value of tikkun olam (“repair the world”). We view social action as a core tenet of our community, and we seek to repair the world through education, advocacy, and direct service to those in need. 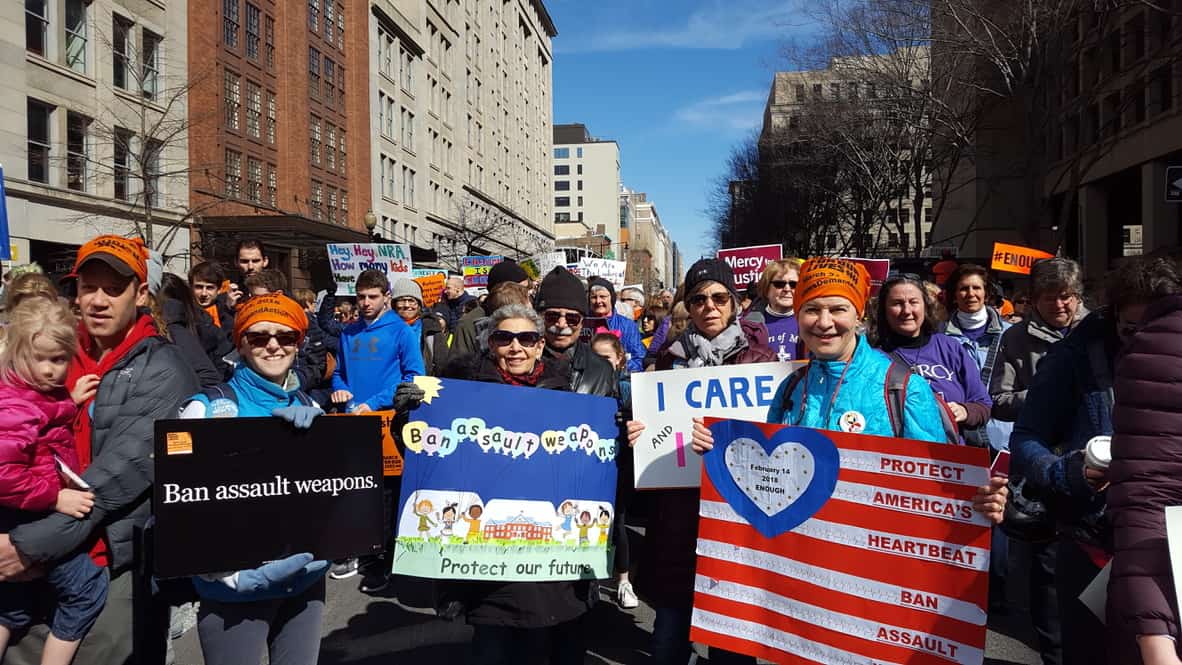 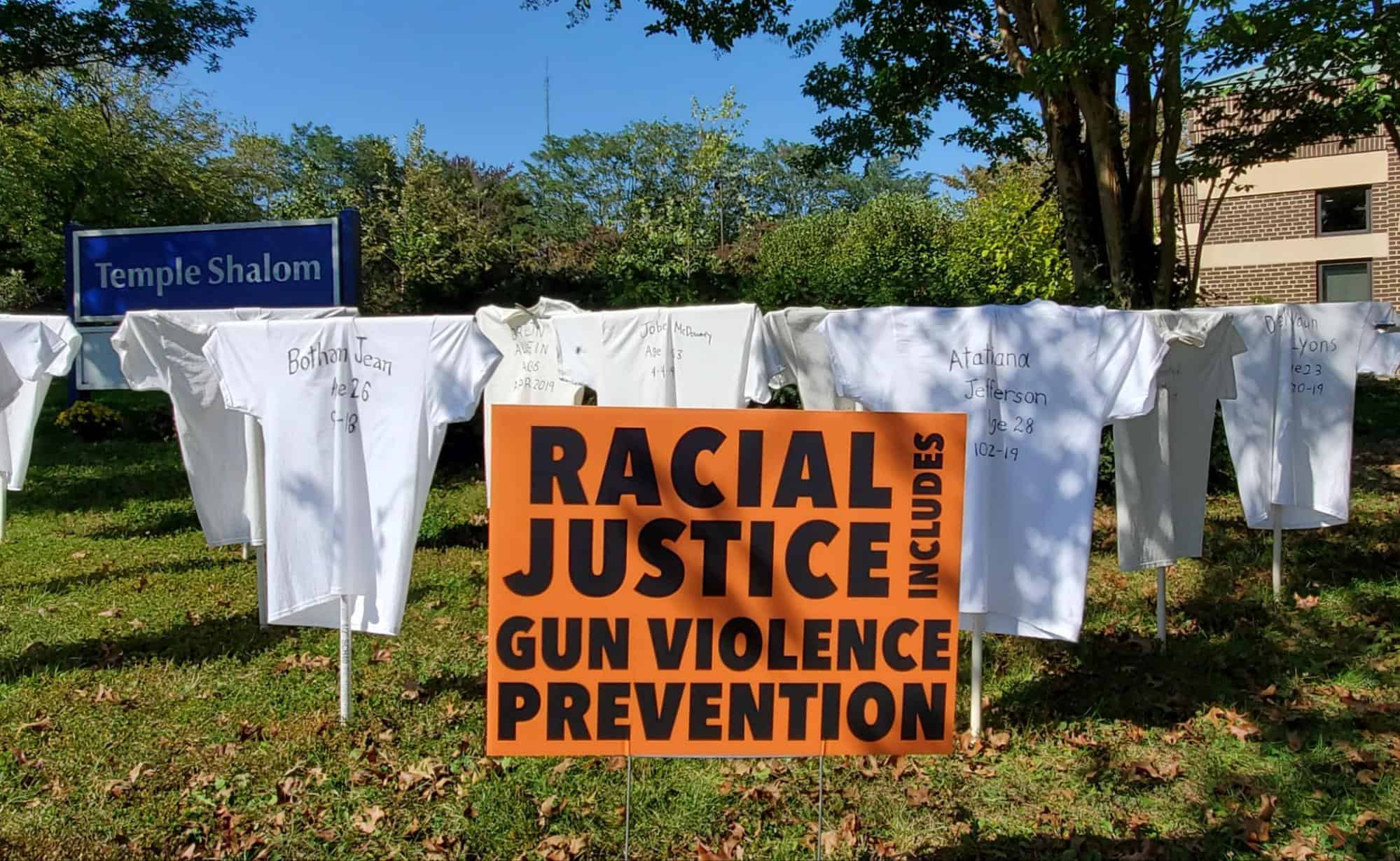 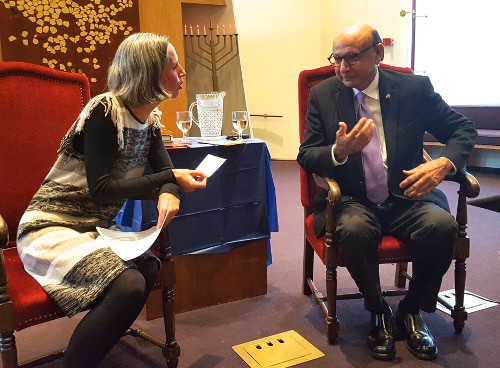 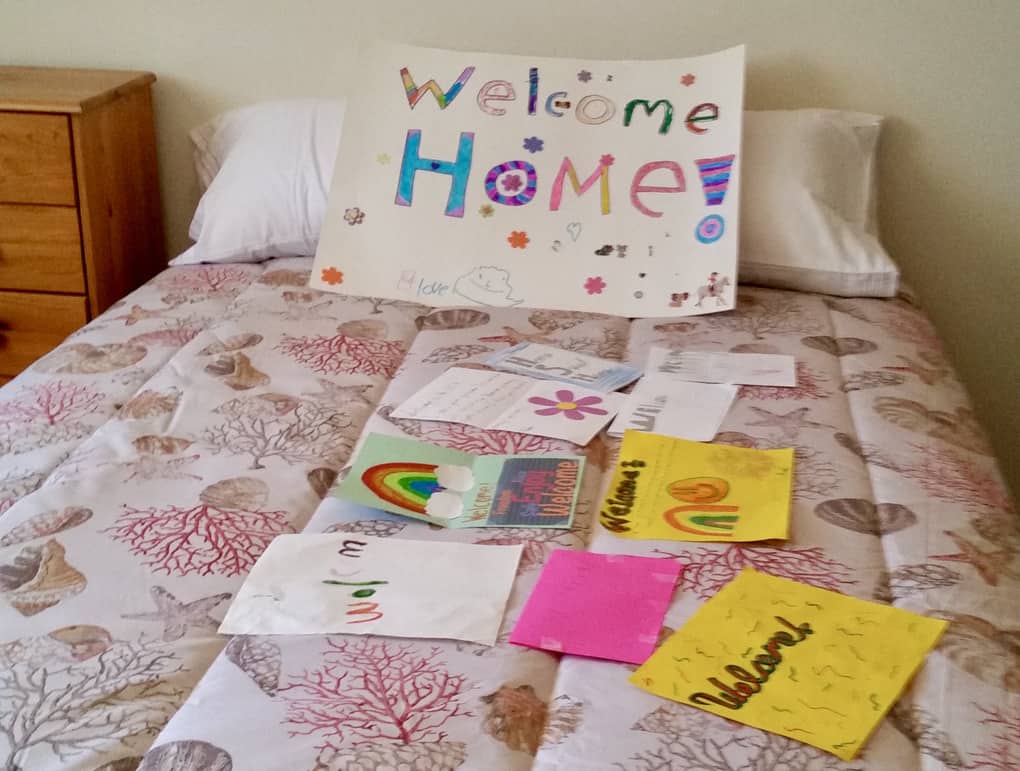 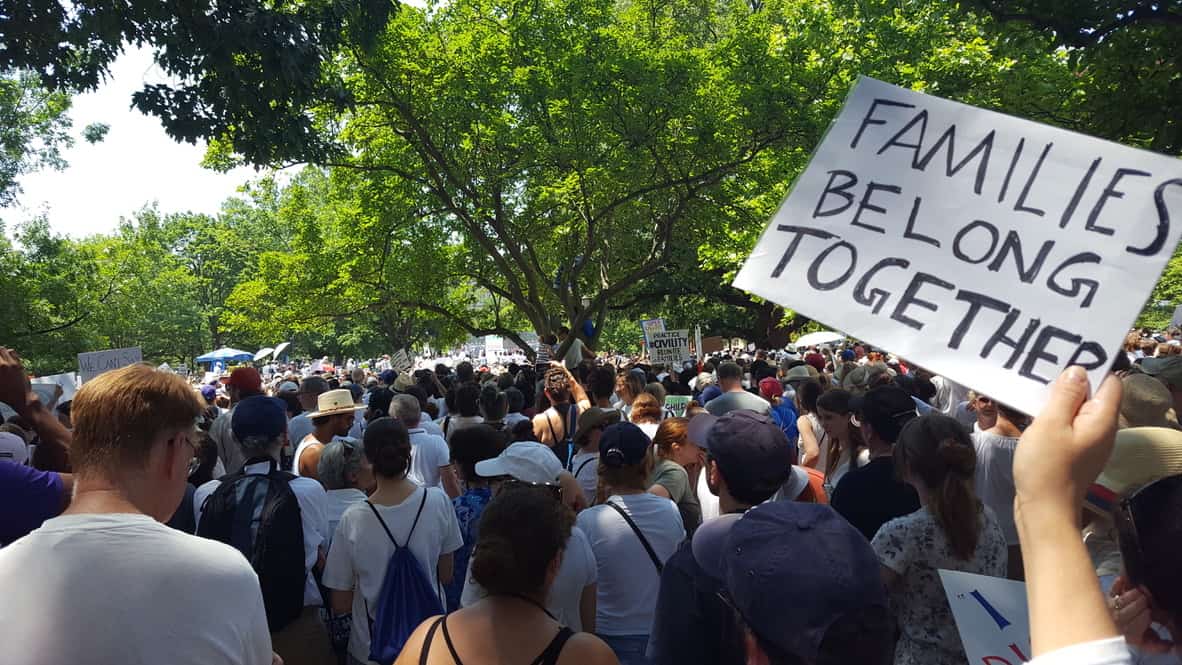 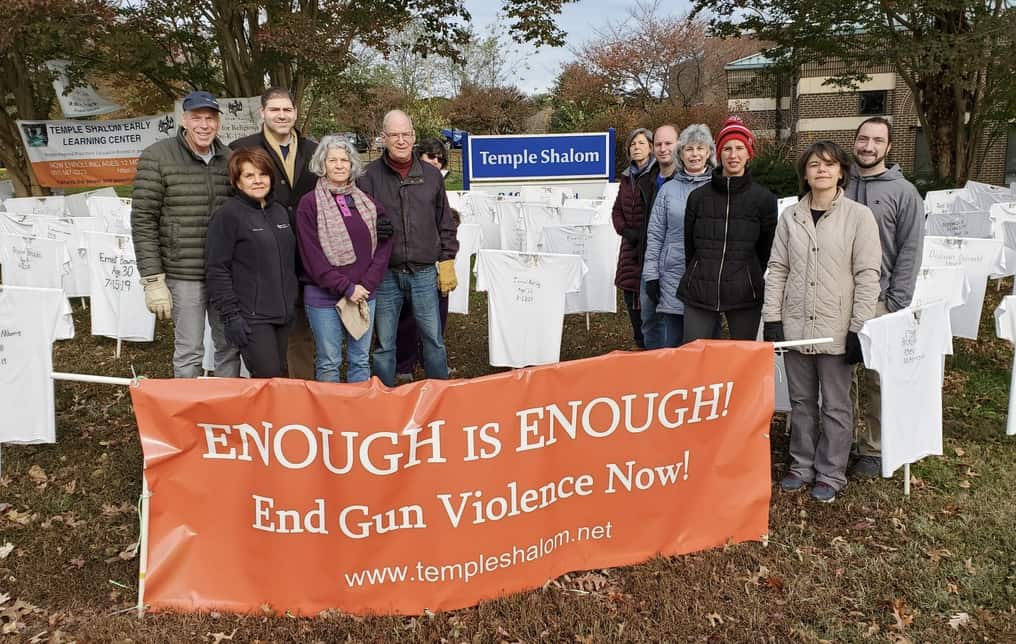 Our Tikkun Olam Committee is open to all congregants and offers a variety of ways—small and large—for congregants to get involved in tikkun olam. In setting our social action priorities and developing programming, we look to the traditions of Reform Judaism so that our activities may advance Jewish ethical, moral, and social values. In formulating our agenda, we consider the platforms of the URJ’s Religious Action Committee. We are often able to enhance our impact by coordinating our efforts with these and other religious organizations and community non-profits. We also publish a monthly newsletter to keep congregants informed about upcoming Tikkun Olam Committee and community events, advocacy initiatives, and volunteer opportunities

As unexpected events, emerging issues, or unique service opportunities arise, individual congregants and clergy may seek the Temple family’s help in responding to those situations.  In addition to the work of the Tikkun Olam Committee, the Temple encourages and supports these initiatives as part of our commitment to tikkun olam.

To learn more about the Committee's recent and upcoming activities, check out its monthly newsletter.

In carrying out the mandate of “do not destroy” (bal tashchit), we commit ourselves to “till and tend” our garden as good stewards (Genesis 2:15) by reducing our carbon footprint and minimizing waste in all our activities.

The Tikkun Olam Committee provides opportunities for congregants to learn more about what we can do as individuals and as a congregation, to reduce greenhouse gas emissions and help ensure the survival of our planet. Activities have included climate change learning and discussion sessions, advocacy at the County and State levels, and youth education programs incorporated into the Religious School curriculum.

We are also concerned about “climate justice” and the disproportionate impact of climate change on the poorest and most vulnerable in our society and globally.  We see this happen with the increasing number and intensity of natural disasters like hurricanes, floods, and wildfires, and in changing precipitation patterns that reduce the availability of clean water and decrease food production.  The impacts of climate change are not borne equally or fairly, and our Jewish values require that we work to end this injustice.

We have joined with other religious organizations through our membership in Interfaith Power & Light (DC.MD.NoVA), a non-profit organization whose mission is to mobilize people of faith to take action on climate change

God commands us to "share [our] bread with the hungry and bring the homeless into [our] house." (Isaiah 58:7-8)

In a nation of plenty, we believe no one should go hungry.  But Americans do go hungry, and our Jewish values require that we take action to alleviate hunger.  To this end, for many years, Temple Shalom has partnered with three local groups, Manna Food Center, Shepherd’s Table, and SOME, to help provide food security to our neighbors in need.

During the COVID-19 pandemic, we made additional calls for donations and financial support to help these organizations respond to the dramatic and alarming increase in requests for assistance.

Temple Shalom supports the enactment of sensible gun legislation at the State and
Federal levels through numerous educational and advocacy initiatives.

Our gun violence prevention activities began in 2018, when we organized a group of
congregants to participate in the March for Our Lives rally in Washington, D.C. This
event followed the mass shooting at Marjorie Stoneman High School in Parkland,
Florida.

Since that time, we have also sponsored special Shabbat services at which guest
speakers, including State legislators and a gun violence survivor, have discussed how
we as individuals and as a congregation can support legislative efforts to end the
epidemic of gun violence in our country.

Heeding this call, our Tikkun Olam Gun Violence Prevention Group monitors gun safety
bills introduced in Congress and in the Maryland General Assembly, and we ask
congregants to contact elected officials to support those bills. We bolster our advocacy
efforts by participating in meetings with Maryland legislators and providing educational
materials to congregants so they can become knowledgeable about the issues and
keep apprised of legislative and other developments.

Marking the first anniversary of the 2018 Tree of Life shooting in Pittsburgh, PA, Temple
Shalom erected an outdoor Gun Violence Victims Memorial. The memorial displayed a
“cemetery” of 179 t-shirts bearing the names of those in the DC Metro area who had lost
their lives to gun violence to-date in 2019, as well as the names of those who died in the
shootings at the Tree of Life synagogue and the Chabad of Poway, California.

The Victims Memorial was designed to encourage people to reflect upon the victims of
gun violence as individuals who left behind grieving family members and friends—they
are not just statistics.  The ultimate goal was to create public awareness and encourage
people to take action to end gun violence—to become informed, to contact elected
officials, and to show public support at rallies and vigils.

We are proud to work with other local congregations, both synagogues and churches, to
share resources, exchange action ideas, and pursue faith-based advocacy that
emphasizes the importance of preventing gun violence and saving lives.

“When a stranger resides with you in your land, you shall not do them wrong. The stranger…shall be to you as one of your citizens; you shall love them as yourself, for you were strangers in the land of Egypt.” (Leviticus 19:33-34)

Temple Shalom has a longtime commitment to refugee and immigration concerns, dating back to the late 1980s when our congregation participated in grassroots advocacy to free Soviet Jews, and we subsequently helped resettle a multi-generational family that had emigrated from the Soviet Union to Montgomery County.

We have continued that tradition by sponsoring the resettlement of a Syrian refugee family in 2017, working in partnership with Lutheran Social Services. We continue to assist local immigrant communities served by Lutheran Social Services and the International Rescue Committee by providing apartment set-ups for incoming families and holding drives for critically needed supplies such as coats and diapers.

The Tikkun Olam Committee has also sought to deepen our understanding of immigration issues and the immigrant experience in the United States through special events that include presentations by guest speakers such as Khizr Khan, Gold Star parent, author, and Constitutional rights and national unity advocate. Mr. Khan gave a presentation to congregants and their guests in 2018, offering observations and insights on a wide range of immigration-related issues.

In conjunction with Mr. Kahn’s visit, the Tikkun Olam Committee worked with Family Diversity Projects to present “Building Bridges,” a touring photo-text exhibit featuring the stories of people who have come to the United States as immigrants, refugees, or asylum-seekers. Read the D’Var Torah presented for the opening of the “Building Bridges” exhibit, by Betsy Kingery, Tikkun Olam Committee Co-Chair.

In response to changing events, the Tikkun Olam Committee also organizes groups of congregants to participate in public demonstrations supporting compassionate immigration policies.  In the recent past, these have included rallies to end migrant family separation and selective enforcement of immigration laws. We have also taken an active role in advocating for legislation at the State and Federal levels. 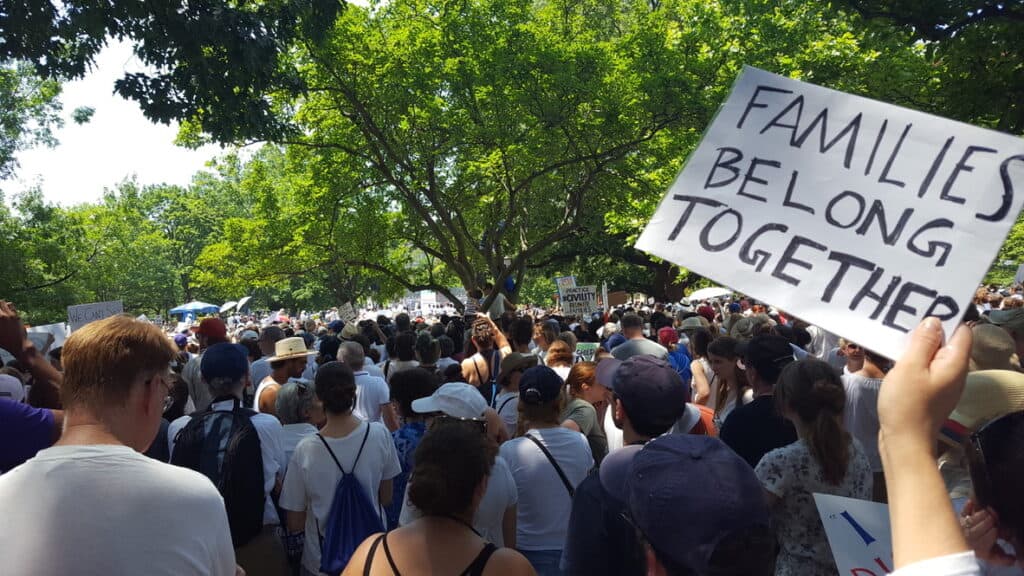 “A ruler is not to be appointed unless the community is first consulted.” (Talmud, Brakhot 55a)

Prior to the 2020 General Election, the Tikkun Olam Committee participated in the Religious Action Center’s “Every Voice, Every Vote” campaign to promote voter participation in the electoral process. With a focus on our fellow congregants, we sent a series of email notices with information about voter registration and in-person and mail-in voting in Maryland and the District of Columbia. We also sponsored informational programs to explain the voting process in Maryland in light of pandemic-related changes.

After the General Election, our volunteers joined the fight against voter suppression efforts by writing and mailing postcards to more than 600 Virginia voters of color who had been deactivated from that State’s voter rolls.  The postcards encouraged these voters to re-register in time for the June Primary Election.

We continue to support voter engagement and voting rights as foundations of American democracy, and we are actively participating in the Religious Action Center’s Voting Rights initiative as part of their Racial Justice Campaign of 2021. 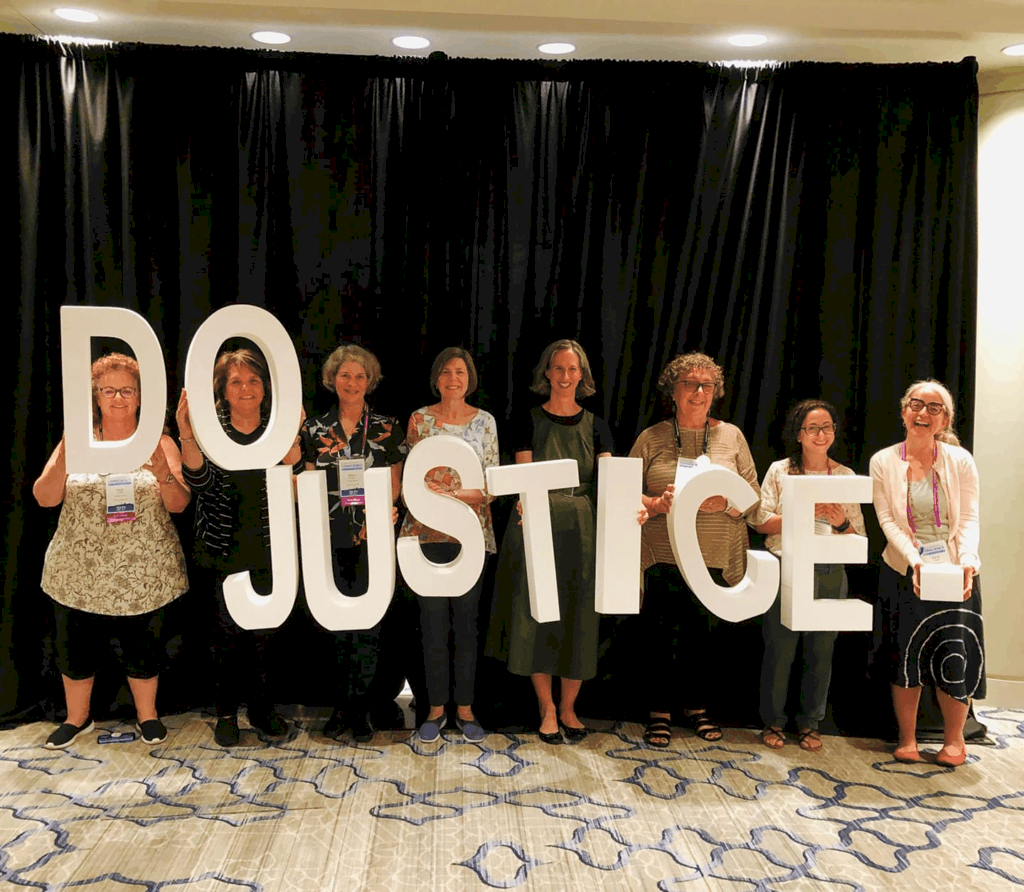 In our monthly newsletter, we provide helpful educational and other resources that address abortion and reproductive rights. During the 2023 Maryland legislative session, we plan to actively advocate for legislation supporting bills that codify and expand a woman’s right to abortion, including a possible amendment to the Maryland Constitution. In addition, we follow the direction of the National Council of Jewish Women and the Religious Action Center on local and national bills that support reproductive justice.

We invite you to participate in all the Temple Shalom Tikkun Olam Committee activities.  Contact our Tikkun Olam Chairs at ten.molahselpmet@malOnukkiT for more information or to offer your assistance.