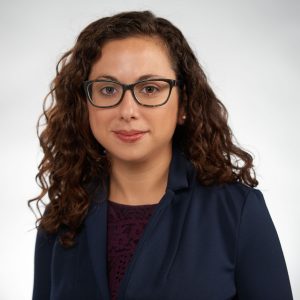 Rabbi Ackerman is originally from Westfield, NJ. She attended Brandeis University as an undergraduate, with majors in psychology and sociology, minors in Hebrew and Judaic Studies, and a certification as a pre-school educator. She continued her studies in both the rabbinic and education programs at our Reform movement seminary, the Hebrew Union College-Jewish Institute of Religion (HUC-JIR), earning her Master of Arts in Jewish Education from the Rhea Hirsch School of Education of HUC-JIR in 2009. She was ordained as a rabbi at the Los Angeles campus of HUC-JIR in 2011.

Rabbi Ackerman acquired extensive rabbinical and educational training and experience during her years as a student. For three years she served as the Rabbinic and Education Intern at Temple Isaiah of Los Angeles, Calif., where she served as the director of Tiyul: Shabbat B’Yachad, a Shabbat-based family education program that served as an alternative to religious school.

Additionally, Rabbi Ackerman worked for several summers as the Director of Education and Unit Head at the Union for Reform Judaism Camp Newman, and also served as the student rabbi of Har Shalom in Missoula, Mont., and Chaverim of Jewish Family Service in Los Angeles (a Jewish social and religious group for adults with developmental disabilities). She completed the first level of chaplaincy certification in clinical pastoral education at the Robert Wood Johnson University Hospital in New Brunswick, NJ. Rabbi Ackerman has a special interest and developing expertise in issues relating to diversity, disability accessibility, and inclusion. Additionally, she is very interested in interdenominational Jewish dialogue and Jewish community efforts on issues of local global social justice.

Outside of the Jewish institutional setting, Rabbi Ackerman loves the outdoors and is an avid runner. She was a competitive cross-country and track runner throughout high school and college and has completed more than a dozen marathons.

Rabbi Ackerman brings her many talents to our congregation. She coordinates the Shabbat Morning Worship and Torah Study service, joins in pastoral visits, performs life-cycle events, leads services, and serves as a teacher and leader of classes and programs in a variety of settings and for congregants of all ages.

During her tenure at Temple Shalom as the Rabbi-Educator, Rabbi Ackerman worked with our congregants on a number of initiatives including co-facilitating the process that led to Kehillat Shalom (a reimagining of family and adult educational engagement in our congregation), working on the DREAM for Equality campaign (the passing of ballot initiatives regarding the Maryland DREAM Act and marriage equality), creating Kids’ Time (Sunday morning infant/toddler-adult educational program), and exploring opportunities for synagogue involvement in the Sanctuary movement.

Rabbi Ackerman is also proud to represent Temple Shalom in her capacity as a faculty member at URJ Camp Harlam, a chaperone for the Religious Action Center’s (RAC’s) L’Taken Social Justice Seminar, and as of the spring of 2017 is excited to be on the Leadership Team for the RAC’s new Campaign to Protect Transgender Students. She also served as an executive committee member of the Greater Washington Education Directors Council.

Why Did You Become A Rabbi?