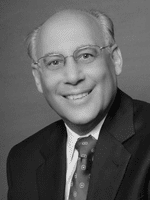 After serving Temple Shalom as its rabbi from 1980-88 and as its senior rabbi from 1988-2001, on August 15, 2001 Rabbi Kahn became the first and only Temple Shalom Rabbi Emeritus, a lifetime appointment. Ordained from Hebrew Union College-Jewish Institute of Religion in 1974, he spent the next two years on active duty as a US Navy Chaplain. He then continued his military career in the Navy’s Ready Reserve force while he accepted the pulpit of Congregation Or Ami in Richmond, Virginia before coming to Shalom in 1980.

As our rabbi, Bruce Kahn worked with Shalom’s leadership to establish the Mitzvah Corps, the Madrichim program, the chavurah expansion, numerous advances in our social justice, b’nei mitzvah, confirmation, post confirmation, adult education, liturgical programs, and much more. His constant emphasis was on service to God through helping individual members, groups of members and the congregation in its entirety move towards wholeness of being. He saw that goal as the essential point of synagogue life. Temple Shalom bestowed on Rabbi Kahn its Lifetime Achievement Award and commissioned the writing of Torat-Shalom to honor his sacred service to the congregation.

Some of his community activities included work performed as the first rabbinic advisor to Jewish Hospice of Montgomery County and membership on the Ethics Committee of the Hebrew Home. He founded Amcha For Tsedakah (Jewish People for Righteous Giving) and served as its president for nearly two decades.  He was a founding board member of the Fair Housing Council of Greater Washington and the Equal Rights Center and was appointed to two Montgomery County committees. For many years he has served on the council of rabbinic advisors to the American Jewish Archives.

In 1985, in support of the movement to free Soviet Jewry, he joined with three other rabbis in running eight arrest demonstrations in front of the Soviet Embassy. The protests were peaceful but violated a law prohibiting such action, a law passed in 1938 to protect the Nazi German Embassy from demonstrations. 180 protestors were arrested, including many members of Shalom. Refusing on principle to pay a small fine and accept probation, Rabbi Kahn and four of his colleagues were sent to federal prison for twelve days. The press dubbed them the Maccabee Five. Later, the US Supreme Court ruled that the law used to prosecute people demonstrating within 500’ of an embassy was unconstitutional.

In 2002, following the ENRON debacle, and at the recommendation of Shalom member Julie Knoll, the Electric Power Supply Association engaged Rabbi Kahn to facilitate the work of a senior executive task force appointed to develop a Code of Ethics for Electricity Trading. Upon completion, the code was well received by all stakeholders and it is still in effect.

In 2004, our rabbi emeritus became the Executive Director of the Equal Rights Center in Washington, D. C., a potent civil rights agency with a national reach.  He served as the executive director for nearly five years before stepping aside to return to the ERC Board of Directors. In 2006, a national magazine devoted to the multi-family housing industry named Rabbi Kahn as one of two individuals from outside the industry having the most impact upon it. The other individual named was President Bush.

In June, 2011, the Washington Lawyers’ Committee for Civil Rights and Urban Affairs presented its Alfred McKenzie Award to Rabbi Kahn for his lifetime commitment to civil rights. Some of the previous recipients of the McKenzie Award were the NAACP, the Urban League, the Leadership Conference on Civil Rights and Eleanor Holmes Norton. Also in 2011, he was invited to Yale Law School where he participated on a four member panel of clergy addressing “Religion and Civil Rights.”  Articles he wrote on civil righs have been published by the University of Massachusetts Boston, “Reform Judaism Magazine” and the “Washington-Afro-American” among others.

In the summer of 2013, after over fifty years of association with Camp Airy in Thurmont, Maryland, Rabbi Kahn was one of two clergy to whom the new Camp Airy/Camp Louise Shabbat prayer book was dedicated.

During his decades of military service he was assigned to over a dozen ships, numerous other commands, including service academies, and the Office of the Navy Chief of Chaplains. He held many command and supervisory billets. In 1986 he officiated at the burial of Admiral Hyman G. Rickover, for whom Mrs. Rickover placed a memorial plaque at Temple Shalom. In 1998 he received orders to the staff of the Commander-in-Chief of the Atlantic Fleet to work as the Fleet Chaplain (Reserve), responsible for the utilization and funding of reserve chaplains from all faith groups. Ordered to active duty on September 11, 2001, Rabbi Kahn was assigned to provide ministry to families and Pentagon commands that sustained losses in the attack that day. He reported aboard while the Pentagon was still on fire. In October, 2001, he was the only rabbi to co-officiate at the Pentagon’s nationally televised 9/11 Memorial Service.

During his Naval career he received numerous commendations and was awarded medals ten times. Through the years he has often taken members of Temple Shalom for special tours of Navy ships, especially aircraft carriers and submarines. Rabbi Kahn retired from military service as a Navy Captain (an Army full colonel is the equivalent rank) in June, 2002. He was called back and briefly sent to the Iraqi theater for the High Holy Days and Sukkot in October 2003,  In 2014 he was the only rabbi in the country called to testify before the Military Personnel Subcommittee of the House Armed Services Committee’s hearings on religious accommodation in the armed forces of the United States.  Rabbi Kahn still holds his commission.

Bruce and Toby Kahn have been married since 1968. They have two daughters, two sons-in-law, a grandson and twin granddaughters. Toby’s extraordinary efforts through the years on behalf of Temple Shalom were honored several times, including receiving a service award that had only been given twice previously in the history of the congregation.

In retirement Rabbi Kahn remains fully engaged in the sorts of activities to which his rabbinate has always been dedicated, including providing assistance to our congregation in numerous ways throughout the year.